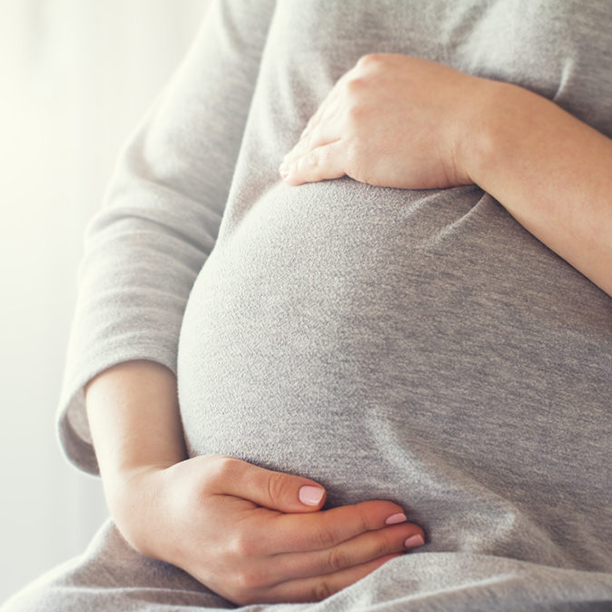 WHAT YOU NEED TO KNOW

Pregnancy is a time of growth and many expectant parents use this time to educate themselves. Books, articles, videos, in-person classes — pregnancy resources abound in our modern world. And one of the most common pregnancy safety questions expectant parents ask is: “What should I avoid when I’m expecting?”

Smoking, alcohol and certain medications usually top the list. Other culprits include soft cheeses, deli meats and fish with high mercury levels. But what about contaminants in the air?

With recent research showing that air pollution can significantly impact mothers and babies, pregnancy is a good time to consider your home’s heating, ventilating and air-conditioning ( HVAC ) system. Humidifiers and air purifiers can help with indoor air quality, but if the source of your air, your HVAC system, isn’t clean, those additional measures won’t matter.

An informed decision on the heating and cooling components you use can affect your air quality. Depending on the temperature where you live, your home might require a furnace-air conditioner combination to heat and cool your home. A heat pump can be a great option for more moderate climates. Because heat pumps don’t use combustion, there is no risk of carbon monoxide filling the air of your home.

No matter how you choose to heat and cool your home, one thing is certain: clean air is best for everyone, and especially for pregnant mothers and newborns.

Studies have found links to adverse health outcomes because of poor air quality. Some affect women before or during pregnancy, while others appear in babies or even older children.

After a typical, healthy pregnancy, a full-term baby usually weighs between six and nine pounds. Low birth weight is defined as less than 2,500 grams, or five pounds, eight ounces. The Centers for Disease Control reports that about 8% of babies in the United States are born with low birth weight.

Multiple studies have observed the effects of air pollution on birth weight. One study conducted in Los Angeles investigated obstetric records of births by non-smoking women. Mothers living in more polluted areas gave birth to babies who weighed, on average, 314 grams, or 0.69 pounds, less than infants who were born to women residing in less polluted areas.

Another study from China observed women who were pregnant during the 2008 Beijing Olympics, a two-month period when the city was required to lower emissions and improve air quality. The study revealed mothers who were eight months pregnant during the Olympics gave birth to babies who were 0.8 ounces heavier, in contrast to women who delivered during the same calendar months in previous years.

Babies born before the 37th week of gestation are considered preterm and are at risk for neurological disorders and permanent physical disabilities, as well as for breathing difficulties, cardiac problems, an inability to maintain body temperature, an immature digestive system and retinopathy. While premature birth can happen to anyone for many reasons, air pollution is one possible reason you should try to avoid.

Several studies have found links between air pollution and preterm birth. One by the Stockholm Environment Institute (SEI) at the University of York revealed that “in 2010, about 2.7 million preterm births globally — or 18% of all preterm births — were associated with outdoor exposure to fine particulate matter.” A Swedish study published in 2013 showed a correlation between first-trimester ozone exposure and the incidence of preterm birth, while a National Institutes of Health study suggested air pollution exposure during a second pregnancy may increase the chances of preterm birth.

The study followed women from 14 states in all regions of the continental United States. It also considered factors such as population density, elevation and distance to freeways and other particulate sources, like power-generating utilities and waste combustors.

For pregnant women who have asthma, as long as it is well controlled, the condition poses no significant risk to the mother or the unborn baby. Uncontrolled asthma during pregnancy, however, can lead to high blood pressure, pre-eclampsia or premature delivery. No matter how well controlled a person’s asthma, air pollution can worsen asthma symptoms.

In addition, recent research has shown air pollution exposure during pregnancy may increase the likelihood of the baby developing asthma later in life. A 2016 study looked at the role of air pollution from traffic sources in urban areas. Researchers discovered that “children whose mothers lived close to highways during pregnancy had a 25% increased relative risk of developing asthma before the age of five.”

Multiple studies, including a 2018 systematic review of literature, have suggested that “air pollution could represent a matter of concern for female infertility.” In fact, one study found that fertility rates in northern California increased when eight plants burning coal and oil closed down, reducing the levels of fine particulate matter and nitrogen oxide.

Other risks and takeaways

When it comes to air pollution and pregnancy safety, researchers have also found links to increases in gestational diabetes in expectant mothers, high blood pressure in childrenand delayed psychomotor development. However, it is important to note that most studies so far have established only correlations between polluted air and disease, rather than a direct cause and effect.

While the research is compelling, remember, in some cases, scientists have not determined which time period — week, month or trimester — is most susceptible to the dangers of air pollution. In addition, most studies have focused on outdoor air pollutants, so more research is necessary to understand the effects of poor indoor air quality on pregnancy.

According to the EPA, outdoor air pollutants can affect human health, harm the environment and cause property damage. Interestingly, the EPA has reported that “the air within homes and other buildings can be more seriously polluted than the outdoor air in even the largest and most industrialized cities.”

How is this possible? One reason is inadequate ventilation. Scientists who have studied sick building syndrome found that designers in the 1970s made buildings more airtight in an effort to improve energy efficiency. The reduced ventilation negatively impacted the health of building occupants. More recent standards from the American Society of Heating, Refrigeration and Air-Conditioning Engineers require an increased outdoor airflow rate.

What’s the application to homes, where we spend the majority of our time? Most residential structures are designed to minimize the amount of outdoor air that can “leak” into and out of the home. When not enough outdoor air enters a residence, pollutants can build up, according to the EPA’s resource, “The Inside Story: A Guide to Indoor Air Quality.”

An example of mechanical ventilation is a fan that intermittently vents to the outdoors, removing air from one room, such as a bathroom or kitchen. A larger air handling system uses fans and ductwork to regularly extract indoor air and deliver filtered outdoor air throughout the house.

When infiltration, natural ventilation or mechanical ventilation are not adequate, indoor pollutant levels can rise. Most immediate effects of poor indoor quality are similar to the common cold or other respiratory viruses. Therefore, it can be difficult to know if the symptoms are related to air quality or minor sickness. If you experience troublesome respiratory symptoms, try to note the time and place they occur. If they go away or decrease when you’re away from home and return when there, this could mean poor indoor air quality is to blame.

When it comes to pregnancy safety, it’s important to investigate the air quality in your home even if you’re not experiencing nagging respiratory symptoms. Some health effects show up only after years of repeated exposure to poor air quality, and these can be as serious as cardiovascular disease or cancer. Here are some actionable steps to check your home’s air quality:

Check for signs of ventilation problems. According to the EPA, these include “moisture condensation on windows or walls, smelly or stuffy air, dirty central heating and air-cooling equipment and areas where books, shoes or other items become moldy.” Other possibilities are a gas stove, certain building materials and synthetic or treated upholstery.

You might also consider testing your home for radon, a colorless, odorless, radioactive gas. Inexpensive testing devices are available, or you can hire a professional to conduct testing. Local and state health departments often have consultants who can help with identifying and solving problems related to indoor air quality.

You can reduce the concentration of indoor air pollutants by increasing how much outdoor air is entering your home. Weather permitting, the simplest ways to improve ventilation are to open windows and doors, run window or attic fans and operate a window air conditioner with the vent control open. Another option is using bathroom or kitchen fans that exhaust outdoors, eliminating toxins from the room and boosting the outdoor air ventilation rate.

If you are doing a temporary activity that can release pollutants into your home, it’s essential to have good ventilation. Examples are painting, paint stripping, heating with kerosene, welding or sanding. When possible, move those activities outdoors.

If you have a traditional HVAC system or furnace, the EPA recommends changing the filter every 60-90 days. Make sure to buy the correct size; it should fit snugly so air does not leak around the filter.

You might also consider adding a portable air cleaner to your home. This is a separate unit that filters gases or particles, even the fine matter that is considered most harmful. There are different types of air cleaners, and effectiveness varies widely. Most air cleaners filter either particulate matter or gases, so if you’re looking to reduce both, you will probably have to purchase two units.

Another possibility is to switch to a heat pump, a decision that depends on climate, budget and personal preference. The average cost of a heat pump ranges from $700 for a ductless mini-split system to $13,000 for a geothermal heat pump system. Regarding air quality, heat pumps do not use combustion and, therefore, do not produce harmful emissions.

OTHER BENEFITS TO MAINTAINING A CLEAN HVAC SYSTEM

Pregnancy is usually a joyous time for expectant parents as they anticipate a new baby. But it can also feel overwhelming when digesting new information, budgeting for baby expenses and preparing your home for your baby’s arrival.

By maintaining your HVAC system, you can find reassurance by avoiding costly breakdowns and repairs. The last thing you want during an already uncomfortable pregnancy is a home that’s too hot or too cold. Having a well-kept HVAC system ensures the air you breathe is clean, giving your baby a greater chance of protection from the risks of poor air quality.

Many expectant mothers might spend time carefully inspecting ingredient lists and conducting online research to guarantee these things are safe for your growing baby.

Breathing clean air, thanks to a maintained HVAC system, is just as essential as the healthy food and hydrating beverages you put into your body during pregnancy. The source of your home’s air is your HVAC system, and it’s important to understand its condition, both on the interior and the exterior, during pregnancy and when welcoming your new baby into the home.

April Leiffer Henry is a writer, wife, mom of three, Diet Dr. Pepper addict and dark chocolate lover. She has channeled her borderline obsessive interest in pregnancy, birth, lactation and well-woman care into a freelance writing business that helps women’s health professionals and birth workers publish awesome website content. Her work has been featured on Her View From Home, MyWorth and Creative Revolt.

Disclaimer: This Content is not intended to be a substitute for professional medical advice, diagnosis, or treatment. Always seek the advice of your physician or other qualified health provider with any questions you may have regarding a medical condition.